Puma NRGY Was Before adidas Boost? Review | Comparison | On Feet

In the case of Adidas vs. Puma, a court in Düsseldorf, Germany, has rejected an attempt by Adidas to prevent rival Puma from selling its popular NRGY shoe.

NRGY features a damping sole made of an innovative synthetic called expanded thermoplastic polyurethane, similar to Adidas’ “Boost.” The two activewear companies each claims it developed the synthetic first, although neither had it patented.

Puma said it started working on the damping material, which promises high-energy return to runners, in 2009 with German chemicals specialist BASF. Puma claims that in 2011 BASF terminated its partnership with Puma and struck an exclusive deal with Adidas instead.

Adidas sought an injunction to stop the sale of NRGY, but lost for a second time before a German court on Tuesday.

“We are happy with the court’s decision,” Puma said, adding: “The court has affirmed that Puma was the first sporting-goods firm to have developed this sole technology.”

The two sportswear companies have a fierce rivalry that dates back to their foundation in the late 1940s after a falling out between brothers Adi and Rudi Dassler in the southern German town of Herzogenaurach.

The sporting goods industry has seen a big rise in patent disputes in recent years as the biggest players try to differentiate their products with features aimed at improving sporting performance rather than just looking good at the gym.

Both Adidas and Puma worked with German chemicals firm BASF on a new foam polyurethane that BASF says is as elastic as rubber, but lighter, providing a springy and cushioning sole that is ideal for running shoes.

However, BASF struck an exclusive deal with Adidas on the technology in 2011, allowing the bigger company to launch its new line of “Boost” shoes in 2013. It sold 10 million pairs in the running category alone in 2015.

That forced Puma to look for a new partner for the foam and it teamed up with U.S. company Huntsman Corp in 2014, launching its “NRGY” line last year. The shoes sell for about $100 and upwards a pair, still well below the price for most “Boost” ranges.

Adidas sought an injunction to stop the sale of “NRGY,” but lost the case at the Duesseldorf regional court on Tuesday.

“Puma tried to show Adidas with this case that even though we are smaller, we will not give in that easily. We will fight for our rights,” Neil Narriman, Puma head of intellectual property, told Reuters.

Narriman said Puma had held back from launching many versions of “NRGY” due to the case but would now promote the rival to “Boost” more aggressively.

An Adidas spokeswoman said the firm did not agree with the court decision and would review its next steps.

Separate proceedings that Puma brought against Adidas, accusing its bigger rival of profiting from its earlier work with BASF, are still ongoing. Adidas denies the Puma charge, saying it worked in parallel to Puma with BASF.
via http://fortune.com/2016/04/19/adidas-puma-shoes/

About Heskicks: Hes Kicks is a sneaker Youtuber that owns the sneaker blog site http://www.collectivekicks.com. Heskicks does sneaker product reviews and comparisons along with on feet looks. Also does thrifting trips for sneakers, minor sneaker customs, unboxings of new sneaker & clothing products, and many sneaker related discussion videos. Heskicks has been collecting sneakers since 2003, and is an avid fan of anything sneaker related.

Similar to its popular “Boost” brand

Tennis-inspired shoes with pillow-soft cushioning for everyday wear Regular fit; Lace closure Synthetic leather upper for durability Cloudfoam sockliner for comfort and lightweight cushioning (as of September 10, 2020 - More infoProduct prices and availability are accurate as of the date/time indicated and are subject to change. Any price and availability information displayed on [relevant Amazon Site(s), as applicable] at the time of purchase will apply to the purchase of this product.)

Single-bandage synthetic upper for a soft feel EVA outsole for lightweight comfort Soft Cloudfoam footbed for quick-dry comfort (as of September 10, 2020 - More infoProduct prices and availability are accurate as of the date/time indicated and are subject to change. Any price and availability information displayed on [relevant Amazon Site(s), as applicable] at the time of purchase will apply to the purchase of this product.) 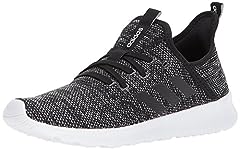 Women's specific fit. Cloudfoam memory sockliner and textile lining Easy, everyday runners Hugs the foot (as of September 10, 2020 - More infoProduct prices and availability are accurate as of the date/time indicated and are subject to change. Any price and availability information displayed on [relevant Amazon Site(s), as applicable] at the time of purchase will apply to the purchase of this product.)

Single-bandage synthetic upper Cloudfoam Plus footbed helps recharge your energy with pillow-soft cushioning EVA outsole is lightweight and durable (as of September 10, 2020 - More infoProduct prices and availability are accurate as of the date/time indicated and are subject to change. Any price and availability information displayed on [relevant Amazon Site(s), as applicable] at the time of purchase will apply to the purchase of this product.)

lol i rekt my brother

The mega nrgy is an upgrade from the V1s

I never heard of the V2s and looked them up now. They look pretty nice and you can get them for 70 bucks here. Complete Underdogs.

Someone should do a sole swap

The puma and Nike founder were brothers not the adidias

Adidas, it so original take PUMA NRGY And Flyknit from NIKE and Make a Shoes

@Hes Kicks – reason why nike turned boost down (read this from DonJuan) is that boost is just white………..aesthetics if you will…

Imagine an air bubble in an ultraboost midsole with Nike flynit

Those Pumas are trash. Looks like you got em from Payless.

Nike needs to figure out a cushioning system to get themselves back in the game…. zoom air has been closest thing comfort wide but tnot quite enough

both company to work whith BASF the inventor of boost ,all the keep in the family , PUMA and ADIDAS

once when adidas term runs out it will doe

Puma should use a boost insole

Did you know the dassler brothers broke up when Adolf dassler (AdiDas) wanted to support Jesse Owens but his brother Rudolph (Puma) wouldn’t support a black man in the 1920s?

too bad the shoes are ugly as shit